Auto Insurance El Potosí Insurance: everything you need to know

Having a car is an important decision in the life of any person. It is one of the most relevant investments we make, normally second only to a house. Protecting both the vehicle and your safety should be one of the priorities when we own a vehicle. That is why the choice of auto insurance is extremely relevant.

At GUROS we want to help you choose the best auto insurance for your vehicle. Our intention is to clarify your doubts, putting at your disposal the most detailed information of the different options that exist in the market.

Currently there is a wide variety of packages and coverages for your auto insurance. That is why knowing what each coverage includes in general with each particular insurer will help you make the best decision and thus have a cost-benefit comparison, which will lead you to be a satisfied customer.

Now it is the turn of Seguros El Potosí, a company 100% Mexican with more than 70 years of life. The company itself defines its auto insurance as accessible, flexible, fast and reliable.

Throughout this analysis you will learn more about this company, its strengths, costs and the variety of products it offers you. The above will help you define if it is the best option for you.

1.1 Types of vehicles covered by the auto insurance of Seguros El Potosí

First of all, it is important to know that Seguros El Potosí's auto insurance coverage applies to the following types of vehicles:

Second, we must consider that El Potosí auto insurance covers only automobiles that meet the following characteristics:

Third, we share the packages that exist for the auto insurance of Seguros El Potosí.

As is common in auto insurance, El Potosí offers the following coverage packages:

Each of the El Potosí auto insurance packages includes the following coverages:

So that you know more detailed information of all the auto insurance coverage that are in the market, we invite you to consult the GUROS Blog. It will help you decide which is the best option for your car insurance.

The rating is linked to the public information of the Bureau of Financial Entities , where it establishes the measurement that evaluates financial entities and takes as a reference the number of Claims and Controversies received, as well as the Sanctions applied by the Condusef.

Taking as a reference the Standardized Basic Automobile Insurance (which works like the Compulsory Civil Liability Insurance ) and covers the basic requirements by law, the coverage of Seguros El Potosí obtained a rating of 8. 11 (from 0 to 10) to locate in the post 13 of the 23 insurance companies that offer this product.

As you could see, El Potosí auto insurance includes different coverages. Most are coverage offered by a large part of the sector. However, they offer coverage above the market average in Civil Liability coverage.

Here is a brief table that offers the main coverage offered by El Potosí auto insurance: 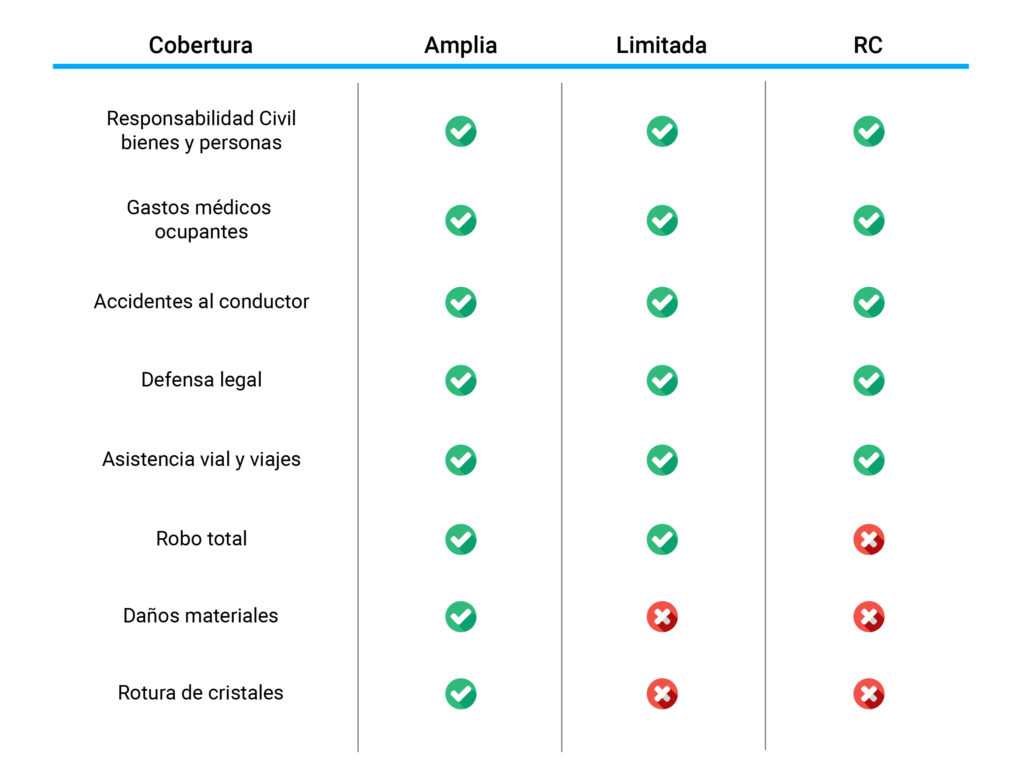 1.5 General conditions of the auto insurance of Seguros El Potosí

This information is very important for you, so we decided to let you know what are the general conditions that you have attached to the El Potosí auto insurance with your official information.

1.6 Quote of the auto insurance of Seguros El Potosí for the

We understand that it is vital to know what is the best price for your car insurance in Mexico. That is why at GUROS we decided to make a quote for the three auto insurance packages of Seguros El Potosí with the most sold vehicles in Mexico in the 2017.

To perform this comparison, we take the list with the 10 best-selling cars in Mexico. We quote the price of auto insurance in the 3 packages offered by Seguros El Potosí in the form of an annual payment. We use as reference the Postal Code 06600 of Colonia Juárez in Mexico City.

The results we obtained are the following:

Being forewarned is very important, and in case of being involved in a claim, contact El Potosí auto insurance assistance. The telephone number you must contact is the following:

1.8 Other insurance and coverage offered by Seguros El Potosí

Seguros El Potosí is a multi-product company in the insurance industry and has a wide range of products that we present below:

Seguros El Potosí is a company 100% Mexican with more than 70 years of existence. His philosophy is to offer a service that he defines as «warm, flexible, fast and reliable».

It has 23 offices throughout the national territory and different insurance products.

Some relevant information about the insurer:

Seguros El Potosí operates in the Mexican Republic and some of its coverage also applies to the United States and Canada.

Seguros El Potosí increased its capitalization in the last two years. According to figures from Standard & Poor's, reached a level of financial solidity higher than market average.

Number of clients and / or volume of premiums

According to data from the Mexican Association of Insurance Institutions ( AMIS ), to the second quarter of 2018, Seguros El Potosí had a volume total premiums of almost $ 810, 284 millions of pesos. This implies that it has a 0. 32% of total market share.

The previous numbers place Seguros El Potosí in the place 36 of 81 in the global ranking of insurers in Mexico. Specifically for the automotive industry, it occupies the place 17 of 32.

The main financial indicators of the insurer are the following:

The Combined Technical Ratio or Combined Index is the operating result of each insurer. The difference of subtracting operating, administrative and claims expenses from your income. As of the fourth quarter of 2017, Seguros El Potosí had a Combined Index in the sector of cars %.

According to data from the Mexican Association of Insurance Institutions, El Potosí reported at the close of 2017 a raise of $ 1, 674, 376 million pesos for the total of all premiums issued.

According to the Sole Circular de Seguros y Fiances and the latest announcement made in this regard by the Mexican Stock Exchange, the rating agency S&P Global Ratings raised the rating from Seguros El Potosí. This is due to a better assessment of financial risk, which helped improve from 'mxAA-' to 'mxAA' (stable outlook).

According to official information, the announcement, released in September of 2018, considered new contracts that gave certainty to the company's profits.

2.3 Information on the quality of care in El Potosí

At GUROS we opted to retake different official bodies to measure the quality of care in claims of each of the insurers with which we work and we share the data of Seguros El Potosí:

Seguros El Potosí had a rating of 3. 84 (on a scale from 0 to 10) in the Condusef User Service Performance Index (IDATU) during the 2017. This places the company in the position 24 of 84 insurance companies of which there is a record.

In the first quarter of 2018, El Potosí was located at the place 33 of 81, regarding the number of claims in Condusef in the Automobile Damage line. Potosí had a total of 23 claims, with a favorable resolution of 29. 60%.

In the same first quarter of 2018, Insurance Potosí had a volume of 14, 297 claims and 17 claims for claims filed with the Condusef .

In the ranking of insurers with the most claims, it is located in the place 21 of 28, with the 0. 30% of total cases before the Condusef.

According to the portal of the Bureau of Financial Entities , it is mentioned that during of 2018 9 penalties were applied to Seguros El Potosí by $ 287, 732 thousand pesos, while in the first semester of 2018 3 penalties were reported for a total of $ 100, 935.

Taking as a reference data from the National Commission for the Protection and Defense of Users of Financial Services, in its last average table of the evaluation of the adjusters , no evaluations have been received from at least one of the adjusters of Seguros El Potosí, so there is no comparison to the average overall 4.2 (from 0 to 10).

This point refers to its advantages compared to the average information of other insurers, so we present the added values ​​of El Potosí for auto insurance that you can find in its offer:

Impact of the pandemic on insurance: brief analysis …

Inbursa Auto Insurance: everything you need to know

MAPFRE auto insurance: everything you need to know

Property Damage Insurance: everything you need to know